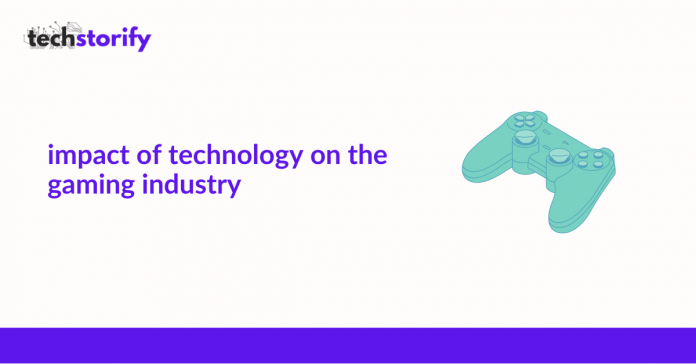 Investing in computer technology is clearly the way forward for many companies. It has dominated almost every facet of modern business. However, there was one industry that has always been ahead of this curve.

The video game business is now a £7.16 billion a year industry, and that is mostly due to its ability to stay on top of current computer technology. The old, cumbersome arcade machines used closed circuit input boards to run their games, but it only took twenty years for Flash software to enable PC users to play all these games on their home computers.

As this technology keeps advancing, it is only going to improve video games further. With that said, let’s look at all the ways that computer technology is changing the video game market and what that means for the future.

The idea behind voice recognition is that it allows an individual to control something from the other side of a room using just their voice. As you can see, this technology is extremely relevant in the video game world. Imagine sitting on your sofa and telling a playable character to walk around and interact with objects on your T.V screen.

This technology works by recognising the vocal patterns and converting them into digital code. The code can then be interpreted by the computer programme so that the action can happen. Voice recognition software is in a very basic stage right now. Video game developers can use this technology to perform rudimentary functions.

Most modern video game consoles work using the in-built hard drive of the system. Online gaming allows players to connect these hard drives via their local internet connection; however, this has proved risky when it comes to security. What’s more, a local server is only capable of housing a specific number of gamers.

Cloud gaming has opened online gaming up in ways that remove all the drawbacks of a local server. The cloud server is constantly encrypted to deter hackers, and players from all over the world can reliably join one of these servers with little disruption. Most video game developers will require you to pay a subscription fee to enjoy the luxury of a cloud-based server, but you may find it worth the price considering the benefits on offer.

Flash games were a specific type of software developed by Adobe. These programmes were simple to use and displayed simple mechanics. This made it easy for anyone to log on to a gaming website and browse through hundreds of video games at their leisure.

Adobe flash is considered to be outdated in today’s modern climate, and that is in part due to the introduction of HTML 5. This newer gaming software system requires a neater string of programming code, which means that developers can fit more into the games than they could before. Also, this gives newer programmers the chance to start creating their own video games.

HTML 5 has almost become the standard for free PC gaming. You will find that it is used on almost every free online video game, mobile game, and most online casino game at https://onlinecasinos.co.uk. You will still encounter Flash from time to time; however, it seems that HTML 5 is now the coding king.

Physical media isn’t dead yet, but it doesn’t look like it is going to survive for much longer. The age of streaming has given the public the ability to watch hundreds of movies and T.V shows on one device with the click of a button. There is no need to go out and purchase a ton of physical discs anymore. Everything is either downloaded or streamed across the internet right into your home. This practice saves time for the consumer and money for the distributor. So much so, that video game developers have now jumped on the digital download trend.

You will be hard-pressed to find a developer that still operates using physical game discs anymore. Now, you can search through a library of games online via your home console. This digital approach to video games allows the developer to patch their games after release, while also updating them with newer software so that every video game feels like an immersive event for years to come, rather than a disposable piece of media. This technology is so popular that the console giants behind the next generation of releases have opted to remove the disc drive from most of their units.

It is impossible to talk about computer technology changing the face of video games without mentioning virtual reality. What was once a pipedream for teenagers in the 80s is now something that can be experienced in your own living room with the right equipment.

Virtual reality technology has nothing to do with gaming technology, however. In fact, this gaming experience is only made possible due to the advancements in head-tracking software. This technology allows the code to identify your head movements, which makes it easier to move the digital images in a 360 setting.

Since the specific head-tracking technology has not been patented by one company, several game developers have been able to manufacture and release their own brand of virtual reality headsets. It is now estimated that almost 1 million people in the UK now own a VR headset, and that number is expected to grow as the technology is improved. It is hard to believe that the virtual reality video games on store shelves are just the beginning of this type of computer tech, so there is no telling what the future may bring.

Computer technology and video games have always gone hand in hand; however, it now seems that the focus for business tech giants is reaping the benefits of the highly profitable video game industry. Therefore, you are likely to see rapid advancement in some of your favourite video games as time moves forward.