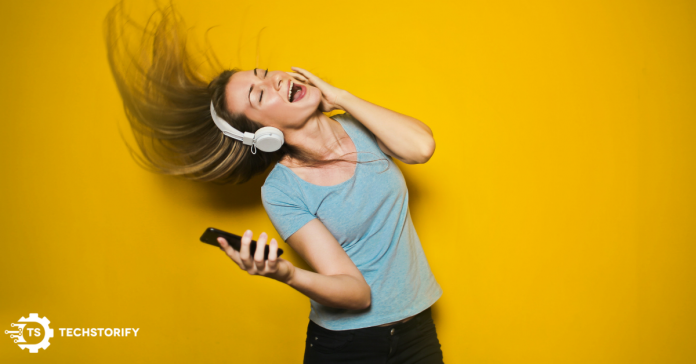 The Best Free Music Apps to hunt new songs, artists and music on your Android and iOS phones.

Music is a universal phenomenon. You won’t find anyone who doesn’t like Music. The music industry has grown since the digital revolution, and some music apps are making it big.

Before the Napster revolution, music was expensive to buy, and the artists were not getting their music distributed properly.

They did not have any control over their music and were getting crushed by the labels. Napster was the first digital platform to break that shackle and started to distribute music online.

The labels took a massive hit, but now, there are so many apps out there to listen to music online.

Today, we are going to talk about our top picks for free music streaming apps on Android and iPhone.

Spotify is the top music app available for Android and iOS. Before Spotify, Apple Music was leading the music app space. However, Spotify has taken over that with a fantastic interface and features. 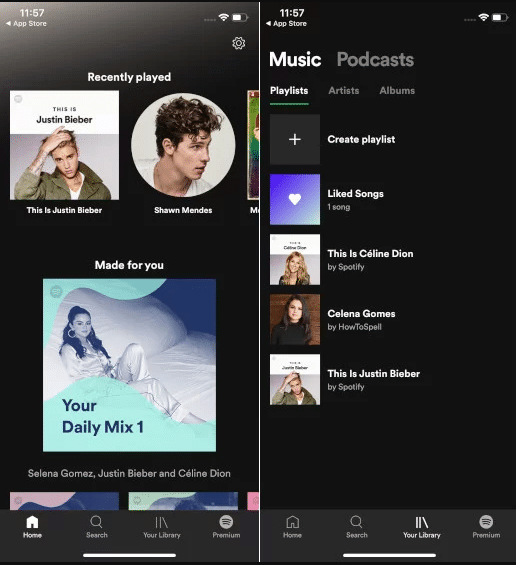 Spotify was the first music app to introduce discoverability feature that lets you explore fresh music every day. You can listen to music from across the globe. It also gives you customised playlists as per your liking which is cool. Apart from that, there is a plethora of podcast content available, which makes it unique. 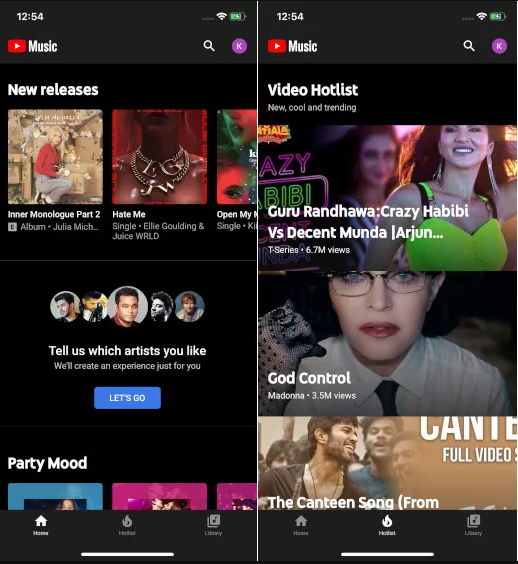 However, after realising the market demand for streaming music, they launched their Music feature as well.

It is a great product just like YouTube and is an excellent alternative to Spotify and Apple Music. Apart from streaming music on the app you also get suggested versions of the same song that makes it different from any other music app available out there.

Third, on the list is Pandora. Just like Spotify, you can explore various artists. You can create your stations. It also has an AI-driven technology to curate songs as per your choice. 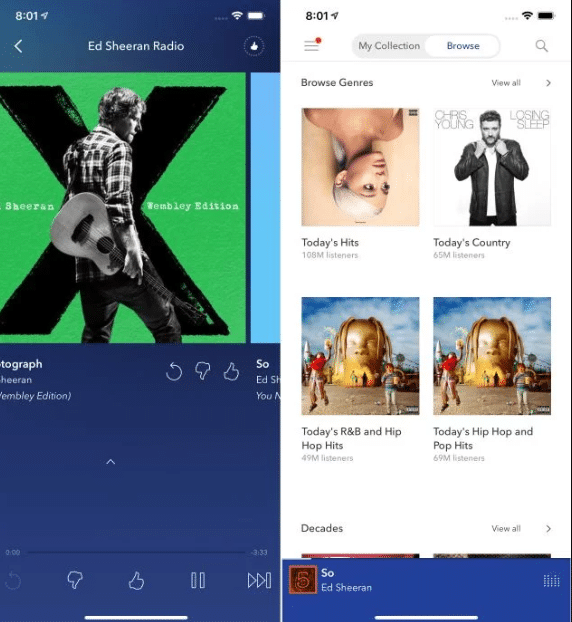 Pandora also has an amazing Podcast section. So, if you are a podcast enthusiast, you should check out Pandora.

Deezer is another music app for Android and iOS, which is known for its vast collection. Almost 53 millions tracks that are available on the platform. You can explore various genres and music styles on the app. 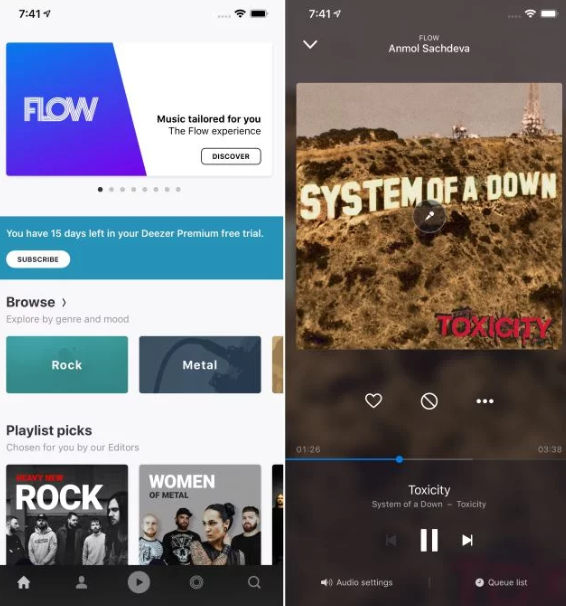 It also has various radio stations available to check out. You can experience high-quality music after buying the premium service.

The next name on the list does not need an introduction. Soundcloud has been the best music platform for all the independent artists out there. They started with a simple upload and share model but became a hit soon. 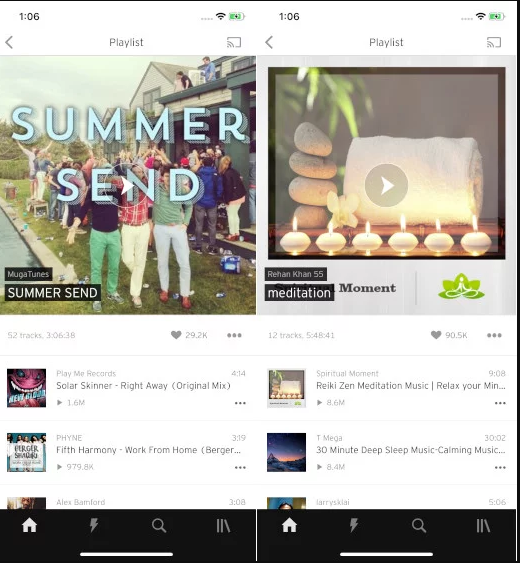 Now, you can find any big star out there sharing the music with the world. Their desktop version is quite popular but also has an Android and iOS app to enjoy music.

Amazon has entered the music streaming business recently after launching its video streaming platform Amazon Prime. Its music app is as sophisticated as the video app. You can custom playlists according to your listening pattern. 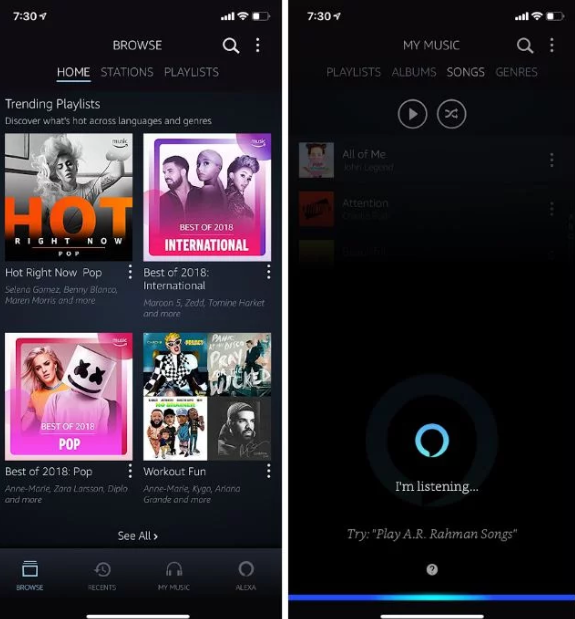 Just like Spotify, it also shows top chares across the globe and you can save and download your favourite song for offline listening. If you already using Amazon Prime then the Amazon Music comes free or else you have to pay a premium for the same.

If you are into radio and is slightly old-school then TuneIn Radio is the best radio app out there for you. You can find various radio channels with different genres to explore. This platform is not only to listen to music but acts like a proper radio. 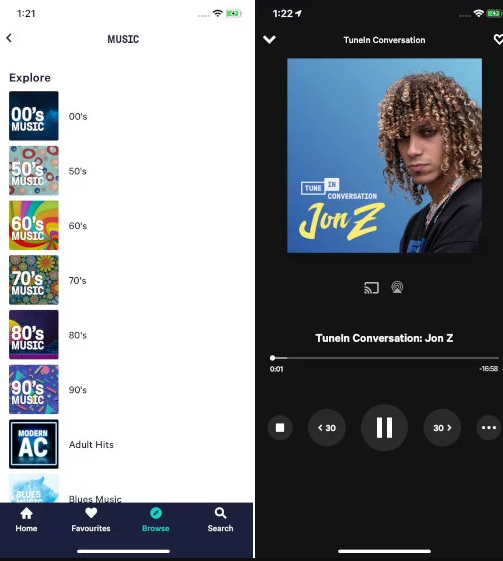 That means you can listen to audiobooks, news, sports discussions etc. They have a huge collection of more than 600 audiobooks across categories.

Among other radio platforms, iHeartRadio is another platform which is quite popular among radio lovers. Nothing fancy about it but it is a simple radio platform and can help you find your favourite songs from any era. 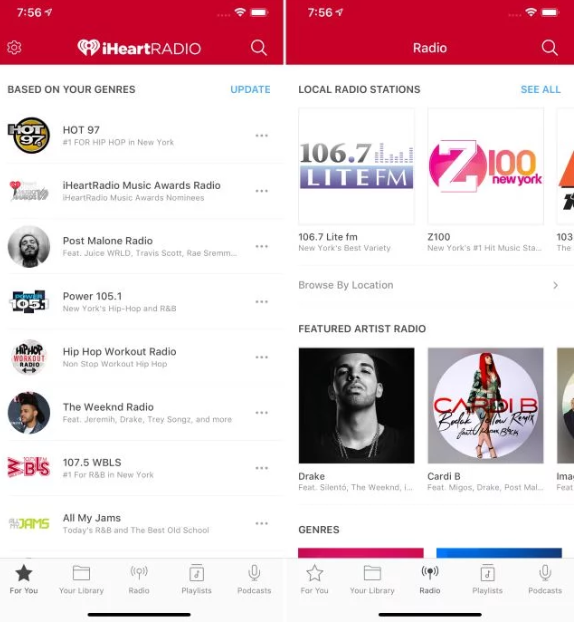 iHeart Radio let you listen to various radio stations across the globe that makes it a flexible platform.

Gaana is an Indian music app for android and iOS. You might be lost in the magic of Bollywood there. However, you can listen to any artist. It is as big as Spotify and Apple Music. The good thing about Gaana is their impeccable offline feature. 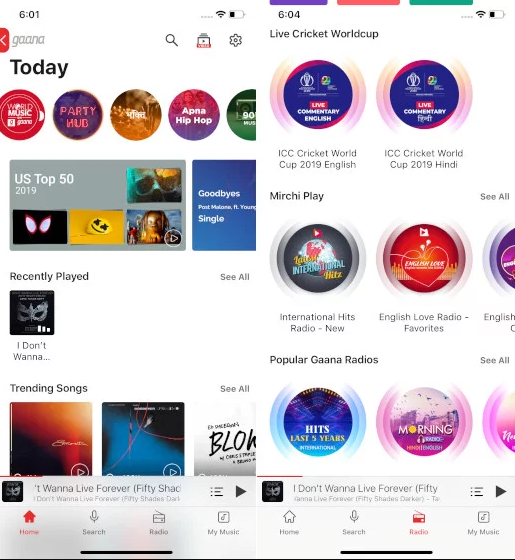 You could save your favourite songs and keep it for times when you are not in a network zone. However, Gaana is only available in India.

Saavn, another Indian music platform was recently acquired by India’s leading telecom giant Reliance Telecom’s Jio. Saavn is also available in India. It is giving a tough competition to top music apps for Android and iOS like Spotify and Apple Music. 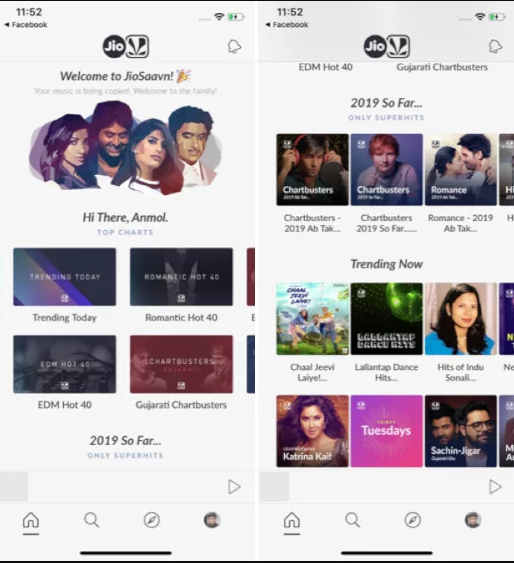 With its extensive collection of music, JioSaavn is among top 3 music apps in India. The design is elegant and easy to use.

So here are the top 10 music apps for Android and iOS that you can explore on the Internet. Our top picks are Spotify and Amazon Music. Both of these platforms have something unique to offer.

If you are in India then JioSaavn and Gaana are the best options to explore as they have similar features to offer with less cost.

We feel that all these apps are good when it comes to their premium version as you can enjoy music without any advertisement.

Some apps are very niche like iHeart Radio and TuneIn Radio that are only best for providing radio content. So, now it is up to your requirement which app you prefer.