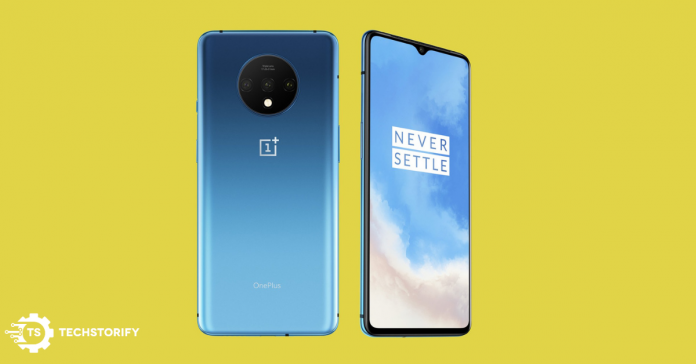 Speed and value are the main mantras for OnePlus from the start of their journey. After becoming the best flagship brand in India, now, they are making an impact on the US market. The latest release of the brand is OnePlus 7T which cost $600 and comes with the latest and greatest Snapdragon 855 Plus and 90 Hz display.

Till date, OnePlus always launched two variants of their phone every year, the first one at the beginning of Spring and later on, an improved version of that with a “T” on the name. But this year things are different. We got 4 primary new devices plus one McLaren Edition, and OnePlus 7T is one of them.

OnePlus 7T – Everything You Need to Know

OnePlus 7T looks similar to OnePlus 7 from the front and have a circular camera bump on the back with the same glass sandwiched design. The display size is 6.55 inches, and the notch is smaller than OnePlus 7.

The phone does not have any IP certification, although OnePlus said they did not opt-in for the test to keep the overall cost of the device low and the phone is water-resistant to a specific limit. The phone does not feel too heavy on the hand as it weighs 190 grams.

There is also an alert slider which can mute incoming notifications. The phone has two colour variants – Frosted Silver and Glacial Blue.

You spend most of the time with the phone looking at the display and OnePlus has taken good care of it. One of the most significant selling points of the phone is the 90 Hz refresh rate. In day to day use the phone felt much smoother, and the difference is more noticeable when you have a regular phone with a 60 Hz display to compare with.

The display has a resolution of 1080p which is less glamorous compared to other flagships, but while looking at the AMOLED display with 402 pixels per inch, you will not feel that at all. Colour temperature, colour accuracy, max brightness, and gamma accuracy everything is top-notch, and the display is also HDR10 and HDR+ compatible.

The optical fingerprint scanner is embedded under the display, which is extremely fast. Although the accuracy suffers from time to time. The display is protected with Corning Gorilla Glass 6. Still using a screen protector is a good idea if you want to keep any phone safe for an extended period.

As mentioned earlier, OnePlus 7T comes with Octa-Core Qualcomm Snapdragon 855 Plus processor which is built on 7-nanometer technology with Qualcomm AI Engine and Adreno 640 GPU. 8GB LPDDR4X helps the phone in multitasking situation. For storage, it has 128 GB or 256 GB UFS 3.0, but there is no microSD expansion.

OnePlus relentlessly try to put the best specification possible on their latest flagship killer and OnePlus 7T is one of them. The phone comes with Qualcomm’s most recent offering, which has 15+ boost on the graphic performance over Snapdragon 855.

Pairing that with the fluid Oxygen OS based on Android 10 and the 90 Hz display, the performance is the strongest point of the device. The phone can run anything thrown at it, and the overall fluidity is excellent. In every benchmark test, OnePlus 7T crushes all other Android flagships of this year.

The battery is both the phone’s strong and weak point as it has a small 3,800 mAh battery, but the charging speed is breakneck. The phone comes with a 30W charging adapter which can charge the phone up to 75% in only 30 minutes. OnePlus calls the fast charging as ‘Warp Charge’ and it is almost 20% faster than OnePlus 7.

The 3,800 mAh battery is also more substantial than OnePlus 7’s 3,700 mAh battery, but the phone suffers from the faster 90 Hz refresh rate and the power-hungry 855 Plus processor. In settings, there is an option to turn down the refresh rate to 60 Hz, and with moderate usage, you can expect the phone to last a single day. Sadly the phone does not have any wireless charging technology.

There are 3 lenses on the back of OnePlus 7T. The primary lens is a 48 megapixel Sony IMX 586 lens with f/1.6 and optical plus electronic image stabilisation. It uses pixel binning technology to get better 12-megapixel photos in auto mode. Then there is a 13-megapixel wide-angle lens with f/2.2 and 117-degree field of view. The third lens is a 2x telephoto lens with f/2.2.

On the front, there is a single camera on the teardrop notch which is a 16 megapixel Sony IMX471 lens with f/2.0 and EIS.

OnePlus was never known for top-notch image quality, but this time the story is different. With many software updates finally, OnePlus 7T takes some incredible images.

An added feature it has is there is a motor on the back camera to take super macro shots. With a tremendous day-time camera with optical zoom and macro shots and a decent night time outputs, OnePlus 7T is a beast in this price point.

OnePlus 7T has dual stereo speakers with an excellent volume level. Although the bass is not great, overall audio separation and quality are fantastic.

Just like other flagships these days, the smartphone does not come with a 3.5 mm headphone jack, but you can use a USB-C headphone if you want. On the other hand, if you prefer Bluetooth, there is aptX, aptX HD, LDAC and AAC support.

When launched OnePlus 7T was the first phone to come with Android 10 out of the box, and it is running Oxygen OS skin on top of that. With the update, it brings the new navigation gesture and system-wide dark mode features. OnePlus also made over 350 tweaks and optimisation with the Oxygen OS, making it faster and intuitive.

Other changes include a new reading mode with low-gamut colour, extended Zen Mode for longer breaks, and Game Space.

Oxygen OS has always been a great alternative to vanilla android as it does not make many graphical changes, only adds some essential but missing features. With all those new updates, it is getting faster day by day and being honest; Oxygen OS is now better than the Google Pixel experience.

Android smartphone manufacturers also have a problem with updating their phones. But OnePlus was never one of them. This was one of the reasons for the fans to stick with OnePlus. We are expecting that at least for upcoming 3 years OnePlus 7T will get OS updates.

The phone has two biometric security options – Face Unlock and In-Display Fingerprint Scanner. The fingerprint scanner is the better option as the dace unlock only uses a single image of yours. Thus it is not as secure as iPhone’s Face ID. Although the face unlocks works extremely fast.

OnePlus has always been known for being the ‘flagship killer’, but nowadays the price of the phones of OnePlus devices are going up also. With that keep in mind, they have also updated the essential things they were lagging. OnePlus 7T has glass sandwich design, superb specifications, high performance, excellent camera outputs and no headphone jack (!) like any other flagships of 2019.

In this price range the main competitors of OnePlus 7T, other than OnePlus 7 and OnePlus 7 Pro are Google Pixel 3a XL (priced at $479) which comes with worse specifications but better for photography and Asus ROG Phone 2 (costs $899) has slightly better gaming performance, a smoother 120 Hz screen, better battery performance and a headphone jack.

The bottom line is, if you are looking for a mid-range device which mostly does not cut a corner and does everything well, OnePlus 7T is the device to choose.