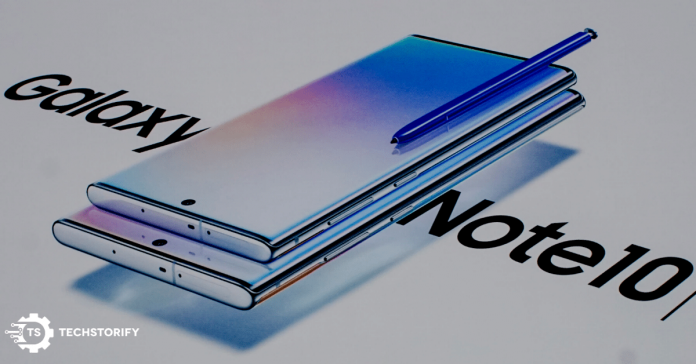 Samsung put every piece of new technology they can to make the Galaxy Note the best android phone of each year and it is also the most awaited phone for every android smartphone lovers. But this year Samsung has launched two variants of the Note and Samsung Galaxy Note 10 is the smaller brother who gets some flagship specs with some not so flagship counterparts.

But still, it is a Note device with all its glory and most highlighted offering, the S Pen. Here we are going to see the main specifications and features so you can make a better purchase decision as it comes with a hefty price tag of $950.

This year Samsung has completely refreshed the philosophy of the design of Galaxy Note 10 series. You can hardly see any bezels, even on the bottom of the screen. They achieved this using a camera cut out on top of the screen, which is also really small. So most of the time it will not come between you and any content.

The camera has a smaller camera aperture compared to the Note 9 but somehow Samsung managed to export good quality images with that, so the trade-off is all right. On the other hand, we are missing in the Irish Scanner to unlock the phone and have to settle with only face unlock, which is not that much secure, to be honest.

The body of Note 10 has a boxier design than last year, but on both sides, the screen and the aluminium bezels are rounded off. The phone is extremely thin and as a result, we have a much smaller battery than the last generation.

Note 10 has 3 colours options available, which are Aura Black, Aura White and the most interesting Aura Glow. The last variant has a rainbow effect depending on how the light is hitting the back glass. As we are talking about the back, this year it has a much cleaner looks as the three cameras are vertically aligned at the top left side and then there is also a flash. The only other thing visible is the Samsung branding.

Oh wait, did you miss something? Yes, there are no heart rate monitor this year. Clearly, Samsung has taken a different path this year for their top of the line devices, as there is no headphone jack either. As said earlier, Samsung has always tried to make the Note the best phone of the year, but maybe now they are more keen to sell the Galaxy Buds.

The power button is now at the left side along with the volume rockers and finally, they decided not to add a dedicated Bixby button, which is a good thing I guess. The smaller Note this year also missing out the microSD expansion slot.

Samsung is the world’s biggest AMOLED display manufacturer and the Note 10 has a 1080p 6.3 inches 60 Hz Super AMOLED panel on the front. Yes, the colour, contrast, outdoor visibility is great, but being a Note, I think they could have bumped up the resolution a bit as nowadays even an entry-level smartphone comes with a 1080p panel. Although it has HDR 10 and HDR+ certification.

Qualcomm Snapdragon 855 with Adreno 640 or the Exynos 9825 is the processor of choice for Note 10 coupled with 8 GB RAM and 256 GB onboard storage. There is no other storage variant available. The device comes with Bluetooth 5.0, ANT+, NFC, GPS, Galileo, Glonass and BeiDou location services.

The IP68 water and dust resistance are also available so some splashes will not do any harm. Although the warranty does not cover any damages caused by these, so going for a swim with the phone is not suggested.

Note 10 comes with top of the line internal specs and the performance is also great. Samsung has refined its One UI to improve overall smoothness. It flies through any games or multitasking situations. Although it falls behind the Asus ROG Phone II and OnePlus 7T which comes with the improved Snapdragon 855 Plus processor and more RAM.

Samsung Galaxy Note 10 comes with a 3,500 mAh battery which I think is small for a Note. For a comparison, Note 10 Plus has 4,300 mAh and the S10 Plus have 4,100 mAh battery. But the Note still manages to almost last a day thanks to the smaller display and Samsung’s Adaptive Battery option which puts apps to sleep depending on your usage habit.

The only good thing to know here is Note 10 has the support for 9W reverse wireless charging, which will be helpful to wirelessly charge your Galaxy Buds.

For selfies, there is a single 10 Megapixel camera with f/2.0 and 80-degree field of view.

If the camera system sounds similar that is because the S10 Plus also comes with the same camera modules and there is nothing bad about it. The camera system is capable of producing some great photos with great colours and good quality HDR processing. For some reason, images from the wide-angle and telephoto cameras are not as sharp as the main shooter.

The only thing smaller brother misses in this department is a ‘Depth Vision’ camera which primarily help to take better portrait mode images and for some 3D doodling which features is interesting for the first time, but it is mainly for fun.

As mentioned, the Galaxy Note 10 does not come with a 3.5 mm headphone jack, so you have to stick with a USB-C or Bluetooth earphones. On the positive note, the smartphone has stereo speakers with Dolby Audio and support for Bluetooth 5. The dual speakers have impressive sound quality and bass.

Previously Samsung was using Touchwiz UI which was buggy and make any phone feel slow in action, but gone are those days. With One UI 1.5 on top of Android Pie, the Note 10 feel extremely fast and there was no noticeable performance drop on any application or game. Samsung has also included a dark mode and that might also help a bit to save power, in case you are still thinking about the small battery.

Samsung has also worked on the Dex feature and now it can work with any USB cable. You can also run Dex on a window in Windows or Mac like a virtual desktop. As a result, transferring files from your computer and smartphone is easier than ever.

S Pen is one of the main reasons to purchase a Note device and Samsung has added some extra features this year. The new S Pen has a gyroscope in it which gives it the ability to perform ‘Air Actions’.

With that, you can swipe up and down to change camera mods and swirl it to zoom in or out. This is not something revolutionary and most of the time the phone will be on your hand while taking pictures. But there is that.

As you can see, this year Samsung has not added all the possible specs they could have. The 1080p panel, no headphone jack and smaller battery do not scream premium like every other year. If you want the best performing device you can go either with OnePlus 7T or Asus ROG Phone II. On the flip side if you want the best camera possible you can get a Google Pixel 4. If the budget is something holding you back there are devices like Xiaomi Mi 9T to give you similar specifications.

But a Note is a Note, right? No other phone has a stylus like Galaxy Note, nor the style statement. So overall with the reputation of the series the Samsung Galaxy Note 10 is a good device. Also as there are two variants this year, in case you want the best offerings of Samsung, go for the Note 10 Plus.