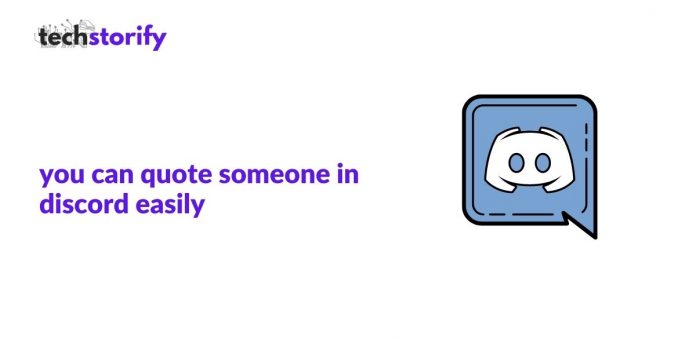 Discord has been recently in the spotlight since its launch in 2015 because it has been used by gamers around the world. Various multiplayer gamers use Discord to interact and chat.

Initially, Discord offered messaging, calling and group call feature. Recently, they introduced video calling and one of the most awaited features ‘Discord Quote’.

Using the Discord quote feature, the users can reply the same way as Whatsapp or Facebook in the same thread and only reply to the ones that they wish to. Originally, Discord was developed for gamers only.

With the latest updates, the app jumped the bandwagon with the businesses and startups actively using it for group chats.

Also, Because of the App’s main focus on chat, Discord has introduced the bold, italics and use of emojis to their chat interface which makes it a great alternative to Slack and Trello.

Discord has millions of players around the world actively engaged in group chat and video call features recently. Hence, the quote in discord is yet another amazing feature that has made more users engaged with it.

However, various forums have questions related to How To Quote on Discord. Because of the recent upgrade, the quoting feature has become a much-talked topic. Various Reddit users have discussed the Discord quoting in their threads.

While the community forums are good, chances are that you might not always get the accurate answer to your questions. I tried finding some discussion threads about the Discord Quote text but wasn’t much impressed with the answers that I was looking for.

Hence, I tried my best to give a detailed breakdown of creating a quote on discord. In the end, I have also tried to answer some common questions related to quoting on discord that most users would want to know about.

What Does Quoting Do On Discord?

One of the major reasons to use Quoting on Discord is because it is a community social media chat platform.  Various users can join the group and discuss a common topic or ask questions.

Quoting lets users answer or respond to only a specific chunk of the text.

Here is a common example of how quoting on discord works.

For example, a user asks about the steps to create an avatar on a Counter-Strike game. Meanwhile, the users are having another random discussion in the chat.

Suppose, another user with the answer to the above question, they can do using the markdown or what can be called a Quote on discord text.

This is how a quoted text on Disord looks like:

This is an example of a quoted text.

How To Quote Someone On Discord: Step By Step Guide

In this guide, we are going to list down all the methods to quote someone on Discord through the mobile apps in Android or iOS.

Though the quoting technique in the mobile is almost the same, the desktop multi-quoting might work slightly different than the mobile one.

Block Quote is the latest addition to the Discord feature. It works the same way as to how the quoting on discord works.

It is pretty simple to start and quote someone using the Block quote. The syntax to block quote is  > or >>> followed by a space.

You can quote someone of discord using two methods.

If you are looking to quote someone on Discord with no line-breaks, then the single line quote is the best option to do.

The markdown for the single line quote on Discord is “>”. 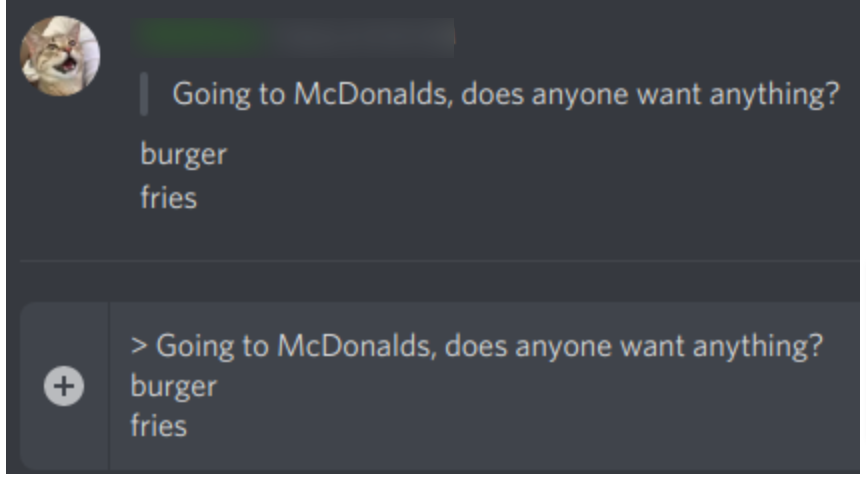 To quote someone on Discord using a single quote text, just copy the old message that you want to respond to and paste it into the chatbox and use ‘>’ in front of the quoted text. Then just below it, add your reply and press Enter.

Single Line Quote might be a little tedious task and may not work as effectively as how Whatsapp and Facebook quoting works.

For example, quoting the text ‘Who Invented the Telephone?’

Now, copy and paste the same message to the original message like this; > Who Invented The Telephone?

Then, press shift + enter three times to exit the quote, type your response below the quote, and send the message.

Multi-line discord quote blocks can be helpful when you have to reply with longer sentences and line breaks. 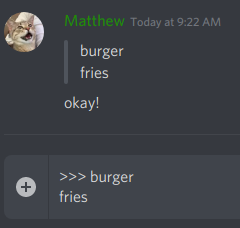 To do this, you can simply use “>” in front of each of the quoted lines and reply to each of the text individually, However, this might seem a little annoying and the users might even get confused.

Using “>>>” in front of the message followed by a space at the beginning of a line of text. Now, this will make the message a part of the entire quote text.

Using the Shift+Enter to break line and add response individually to each line. To leave the multi-quote text, you can send a message and start a new one or confirm “>>>” using the backspace key.

In the Discord for Desktop, Discord blockquote for single and multiple works using the syntax “>”. To make your blockquote a single line blockquote on desktop, press “Enter” and then “ Backspace” to go back to the normal text.

Using Code Blocks To Quote Somebody On Discord

Code Blocks was the first method that people used to quote on discord. With the blockquote feature, this code block is less frequently used but it is a drop-dead simple method and works as a great alternative to the first method.

Creating a code block just requires the use of the backticks in the original message. You just need to wrap your text in a single backtick (`) or three backticks (“`) and it would do the trick for you. 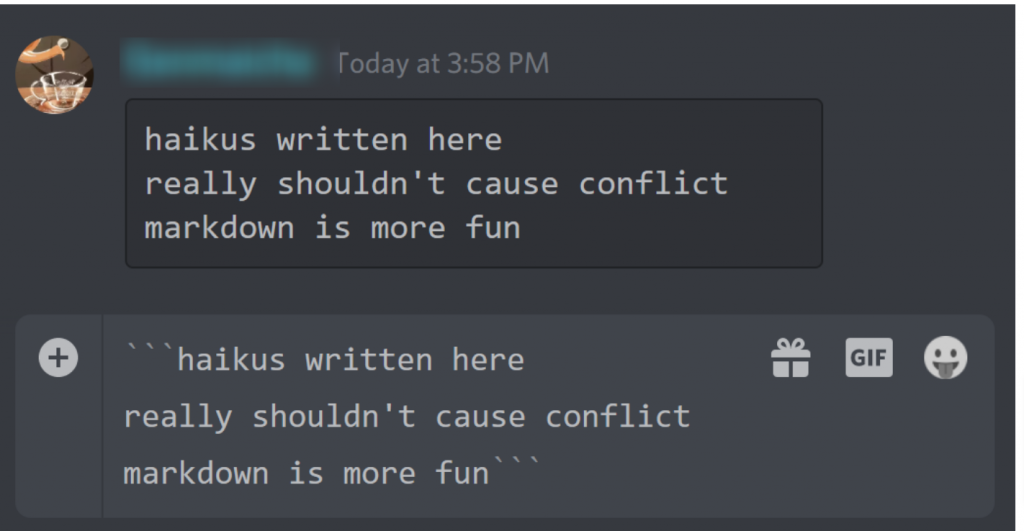 It is up to you whether you want to go with the Code Blocks or Block Quote method both of which require quoting the text.

Use the Quote Bot (Advanced)

This method was found in the Github projects and it is one of the simplest methods to quote the text on Discord.

If you are the admin of a server, the quote bot method should be the quickest and best way to quote text messages on Discord.

This method works like a complete quote functionality for the Discord. All you need is to download install the basic Github projects that provide functionalities.

You need to find out how to download the Github projects. Here are the two most viable projects to do that:

Both of these projects are equally functional and give amazing quoting functionalities. However, we recommend you try each of them individually and check for the ability to quote text on Discord.

In my opinion, Citador is a great bot that offers a simple and straightforward tool for and implements a simple button for the text quoting. The only catch is that Citador works with the BetterDiscord which is yet another custom client.

BetterDiscord and other custom clients can be against the Discords’ TOS. Make sure to use it with care and implement it within the rules.

Quote is a feature-rich self bot and a more dedicated bit to quote text on discord. You can also follow the documentation in the GitHub project pages to deploy the project.

One of the other methods is to create the Source code of a quote bot (if you are a developer and want to see how these bots are created).

Now, that you have read about all the methods to Quote text on Discord and how it works.

When To Quote Someone On Discord?

You would want to reply to a specific text message on Discord. At times, someone would ask two or more questions on the same line.

Now, you would want to answer any one of them. Using the block quote, you can reply to these questions individually or even quote them separately.

In some cases, someone might even send lengthy messages that you would want to reply to. If you want to address a specific part of the message, just quote the text and write your response to that.

Hence, quoting in such a way can reduce the confusion and initiate the chat faster.

Ans: One of the major reasons for the Discord code blocks not working because most users confuse backtick (`) with single quotation marks (‘). Note that the Discord quote would only work with the backtick and not with the single quote. The backtick key can be found to the left of the “1” button on your keyboard.

Various server admins do that to make it easier to quote someone on the text. They use various bots that can add to your server and provide the quotations wherever needed. As an admin, you can install various bots and test each of them individually. For this purpose, Quotinator and Citador are the best choices.

Ans: Absolutely. There are some ways to customize the look of your Discord platform. Users can customize the Discord themes, fonts and built-in styling for better customization.

For extra personalization, users can try BetterDiscord. This platform gives users to download the customized theme and alter the stylings.

Discord also offers an API version using which users can create their own versions of social application.

So, you see how Discord quote features work now. Discord has evolved from being a simple chat app to space where developers can use and sell any type of games.

More features and functionalities are yet to be added to the Discord application apart from the quote application.

Discord has over 100 million users with more users engaging daily. Users can also upvote the feedback requests and Discord developers can consider implementing them later.

If you feel there is a feature missing in the Discord, you can suggest and get the request updated.